When Amit and Neha Bhandari were hunting for a suitable home for their growing family, their eyes were set on Andheri West. Proximity to the kids’ school in Juhu also played a huge role. But the clincher was the spacious balcony. Amit and Neha were excited because Mumbai apartments rarely come with balconies and large, spacious ones are a rarity.

The couple is at the helm of roles that are scientific and super technical — Amit is the Chief Technical Officer at Magma HDI, a general insurance company, while Neha, a Chartered Accountant by profession, had risen over the years to become the Chief Financial Officer at Runaya Metsource — their approach to design is also one that is commanded by functionality and comfort.

With growing kids and demanding careers, the Bhandaris weren’t too keen to engage with a traditional design studio because it would mean coordinating, debating and dissecting every single detail. That’s when Neha chanced upon Livspace. She was thrilled to learn of their turnkey model. With the assurance she wouldn’t have to hear about plywood and veneer pricing, the Bhandaris signed on the dotted line.

The striped wallpaper keeps things busy in the living room without drawing too much attention to it. The picket white swing in the balcony looks resplendent with the pretty bougainvillaea as the backdrop.

For Livspace designer Vidhi Shah the prospect of designing such a large space naturally drew her to the project. Neha and Vidhi would over the next few months sit and hash out the details room by room.

The living room, which is where the Bhandari family unwinds together most nights, had to be dominated by comfortable furniture. A warm walnut three seater and single seater were paired with a sapphire blue daybed.

To maintain unity, sapphire blue finds its way into several elements in the open living and dining.

It became apparent from their discussions that the Bhandaris had developed a fondness for onyx.  Three slabs of lustrous beige onyx found its way onto a dining table wall and the dining table itself, the TV unit, the shoe rack in the foyer and the desk in the spare bedroom. To break the overplay of marble, onyx and warm walnut, white was selected for the console, cutlery unit and the coffee table.

Even though the open living and dining is massive with enough space for movement, the Bhandaris wanted their living space to seem larger. Vidhi broke down the outer wall of the guest room allowing the eye to travel further in. Below, she gave them a console on the dining side and jali shutters to cover their puja space in the bedroom.

But what made headlines is the champagne, white and walnut panelling that literally carries the look and feel of the guest bedroom.

The Bhandari family loves to snuggle under the sheets and watch movies. On the only bare wall, panelling was provided for a flat screen so that the four of them could spend some quality time together.

In the master, Amit and Neha wanted to splash the walls with something bright. Purple wallpapers with an ethnic motif in ivory dominate the space but Vidhi ensured crisp white wardrobes would follow just to offset the solid shade.

The siblings are huge space buffs. We love how the kid’s room is a symphony of buttery yellow and teal blue.

The entire family was invested in fleshing out the finer details of Avani and Divyam’s bedroom. Should they go with the safe bet of twin beds? Or a murphy bed to save space? Or would a simple double bed suffice? Finally, the kids won and in came a crisp white bunk bed with stairs that camouflage storage.

But on the L-shaped wall that faces the bed, Neha wanted something interesting and clever to engage the siblings. Magnetic paint was chosen and astronauts, spaceships and planets float about happily on Avani and Divyam’s teal blue space replica.

A simple channelled headboard in ivory with a box frame in slate takes centre stage in the parent’s bedroom. Neha wanted to ensure the grandparents have a dedicated room when they come visiting.

The spacious balcony that hugs the outer walls of the living and guest bedroom was uplifted with an artificial vertical garden that can give its real counterpart a run for its money.

We’ve kept the best for last.

When they bought the house, Neha immediately envisioned a swing in the balcony. It’s almost nostalgic because growing up she remembers spending a lot of time on the swing at her parent’s home. Somethings don’t change because when Divyam returns home from school, he heads straight for the swing!

Designing for the Bhandaris was challenging on many levels. Amit and Neha were very calm and patient through the delivery of the project.  My learning curve was huge because I could experiment with myriad colors, textures and materials. 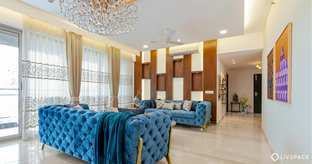 4BHK With a Perfect Score on Unique Interiors 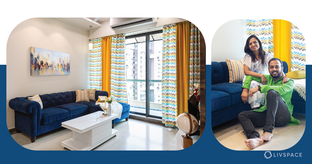 How We Designed This Elegant and Compact 2BHK in Mumbai in Just 10 Wee... 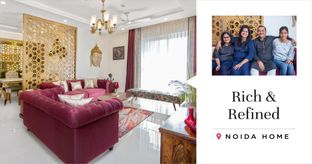 Why We Love This Luxe 3BHK 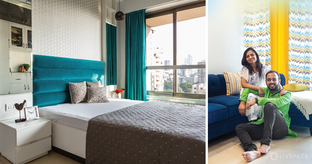 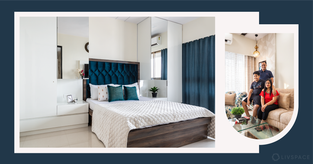 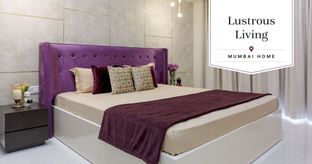 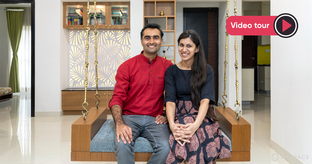 Designer Reveals How to Decorate A Home That Won’t Go Out of Sty...